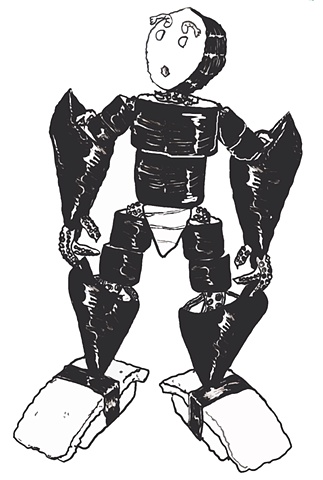 Tainted Android of Raw Fish T.A.R.F. (Tainted Android of Raw Fish) - TARF is a shape-shifting creature from a far off galaxy who is obsessed with earth culture (a one sided love affair as most earthlings think they are alone in the universe). TARF cares for his tiny son, Son of TARF and enjoys teaching him about Earth heroes like Bruce Lee, Bruce Willis, and Bruce Cambell,and Bruce Vilanch. TARF works as a fight promoter / coach in the Nexus Zero TOTAL UNIVERSE GLADIATORIAL GAMES. His used-car-salesman persona has ended him up in deep water with a mounting gambling debt and a string of lost fights. When his son is trapped in a day care he cannot pay for, TARF scans the internet to find a warrior that could turn his fortune around. Impressed with the fighting techniques in all the foriegn DVDs he has watch, TARF seeks out earth's largest holder of action movies to find one Byron Abregado. After traveling to earth (assuming the form of a mass of sushi, his favorite earth cuisine) and pleading his case, Byron agrees to enter the Gladiatorial Games, which TARF mis-represents as more of a swap-meet.